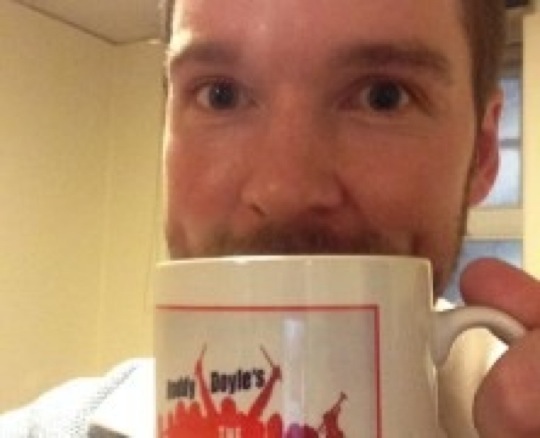 Killian Donnelly is currently playing Deco in The Commitments at the Palace Theatre, a new musical based on the best selling novel by Roddy Doyle.

Killian took a few minutes out of his day to sit down and have Tea With Wilma to tell me about the show. Here is what he had to say!

1. Can you tell me about the story of The Commitments and what attracted you to the part?

The story roughly is about a group of young unknown kids, who escape their boring mundane lives in Dublin, by putting together a band and playing soul. It opens their eyes to something they’ve never heard before. The story follows the bickering and ups and downs of the bands journey. I’d seen the film and read the book and the part of Deco is a gift. I was dying for a chance to audition for it. To sing this material and just entertain on a stage as Deco seemed to good an opportunity to pass up. Couldn’t believe it when I was cast.

2. Do you have any pre show rituals that you have found yourself getting into over the years when you perform?

I wish I could say I’m very rock n roll but unfortunately I do all the normal things such as warming up and having a coffee. In fact a camera crew were filming for “The One Show” the other day and they came into the room. They said “Just pretend like we’re not here and go about your normal pre-show routine. I was reading a book, so I continued. By the time I got near the end of a page they said “Actually sorry, would you mind getting up, walking around and pretend to warm up!” Sometimes I’m just too rock n roll!

3. Do you have any dream theatre roles you would like to play?

The only part I’ve ever seen on stage and thought, I’d love to play that, was Tony in Billy Elliot. I did it for 6 months and now I just audition for what’s coming along or that would help me step up in the business. Deco was something I was dying to audition for.

4. If you could be the opposite sex for a day, what theatre character would you like to play?

The Trunchbull in Matilda. That’s a woman right?

5. Have there been any funny/awful moments that have happened to you on stage during any of the shows you have been in?

I forgot the words to “The Peoples Song” once in Les Miz. I sang…”Do you hear the people sing, singing the song of angry men, it is……a time so we can go….and get the…ttrrreeessssemoooonapahs……..when the beating etc. Also walked onstage as Raoul with a foot of toilet tissue strung from my boot. I was such a powerful character in THAT scene that night.

6. What show would you like to see make a come back into the west end?

The Producers. First show I saw in the west end and I laughed a lot. Raging I only caught it once.

7. Do you have an all time favourite musical show or song?

Not really. I don’t have a favourite musical. There’s musicals I like in equal measures but nothing I’d say is my favourite. Song wise……(if from a musical) I’d feel the same. BUT if you’re asking as to what song EVER I’d consider to be one of my all time faves; at the moment it’s a little ballad called “The Luckiest” by Ben Folds. Have a listen and enjoy x